Camp Tamarack hosted its first-ever Tamarack Tales nature camp in July of 2018. With three lakes and a little over 180 acres, there is a lot of nature to be had at Camp Tamarack

Most campers know about Orlando Lake, which is where our swimming beach is. Some know that Orlando is connected to Knight Lake, which is what the Vespers area overlooks. A few know about Youngs Lake, which has its own Tamarack water access and a dock just down the trail across from the Basile Retreat Center.

During Tamarack Tales, campers had the opportunity to do citizen science by examining the water quality of Orlando and Youngs lakes using Digital Observation Technology Skills kits borrowed from the UW-Extension at Upham Woods. Campers used the eight instruments in the kits to record salinity, dissolved solids, conductivity, dissolved oxygen, phosphate, turbidity, take pictures and other readings to get a baseline picture of Camp Tamarack’s lake water quality. All of the data was shared with the Environmental Protection Agency and the WI Department of Natural Resources. We were doing real science!

Among the more interesting discoveries of the camp was the realization that the lake is teeming with macro-invertebrates – bugs of all shapes and sizes that actually are among the indicators of lake water quality. Some bugs simply will not tolerate pollution, so the fact that we found some of those picky buggers tells us that our lakes are not suffering from pollution. We have algae, so we have more phosphorus than we should have, but overall our lake water quality is very good.

We saw things under the microscope that blew us away. The shell that is pictured on this page was so small, we almost didn’t even notice it was a shell – we thought it was a speck of sand! The little dot in the upper left is what we saw with just our phone camera. But when we put it under the microscope, we saw it was a really pretty shell with stuff growing on it! Who knew?! 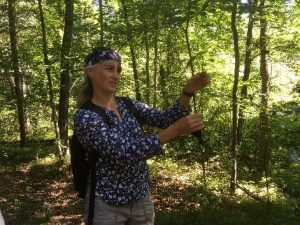 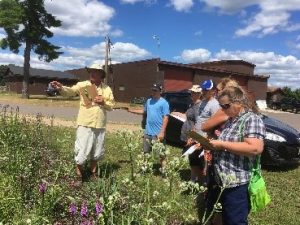 In addition to water quality, we were led on a nature walk by Dr. Shannon Davis-Foust of UW-Oshkosh, who told us about prairie pollinators (bees) and plants. WI Master Naturalists Bob and Christine Faulks led us on a tour of the restored prairie next door to Camp and of Tails & Trails, a nearby leash-free dog park in which they have restored a wetland and prairie. Jeff Huelsbeck, another WI Master Naturalist, helped with the DOTS surveys and talked to the campers about what you should bring with you to be safe in the woods.